This club history, up to 1995, was compiled largely by the late Graham Burgess. Later, during the compilation of a 50th Anniversary Book, various proud Cornwall people supplied their stories. In the words of Don Cameron, the editor of the clubs '50 Not Out', "club histories suffer if too many contributors try and tug the narrative in too many directions. In this case, all the Cornwall people involved had only one motivation - pride in their Club, its cricketers and its magnificent surroundings." This page is intended to inform our members of their clubs proud history and to remember those who made the club so great,

The Ponsonby Cricket Club was established in 1895 soon becoming a prominent force on the Auckland scene by gaining senior grade status, winning the championship three times between 1914 and 1917. During this period several members gave Army service on the horrific battlefields of Gallipoli and Flanders in the Great War of 1914-18. The 1914/15 captain, F.R. Wilson, and teammate, V.C. Kavanagh, both made the ultimate sacrifice. They are pictured in the team photo below. The club had several name changes following an amalgamation with the Balmoral Cricket Club in 1938, ultimately settling for Ponsonby Balmoral in 1945. Out of respect for those who served we acknowledge club members W.A. Middleton, a Spitfire pilot, and R.H.W. Bentley, also in the Air Force, were casualties of the War of 1939-1945. 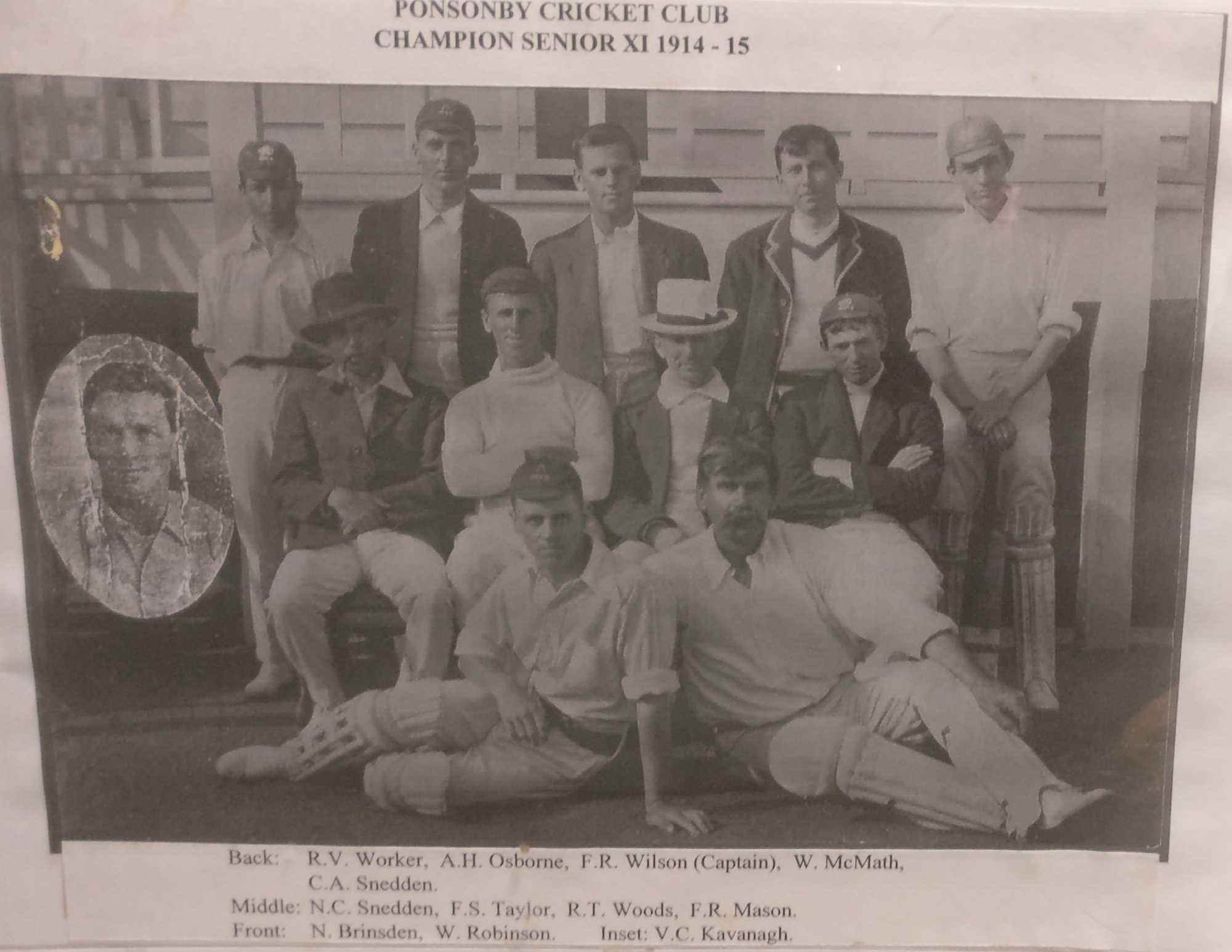 It wasn't until a 1952 district scheme saw the club be allocated the Epsom Onehunga area, gaining a 10-acre olive grove as a home ground. The ground was developed by the hard work of several members voluntary work, eventually being opened in December 1955. In 1956 the appropriate name 'Cornwall' was adopted. 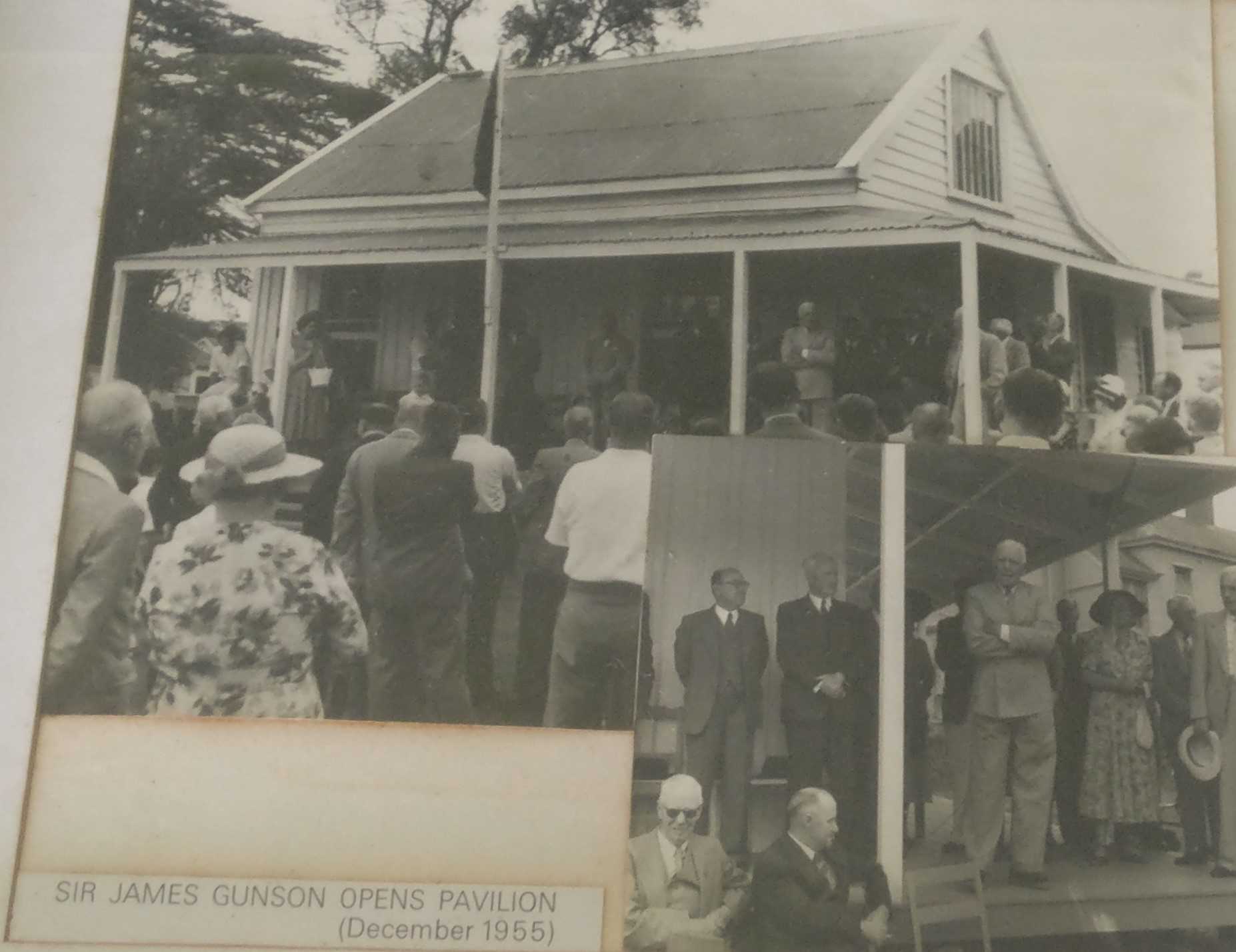 In 2004 the club celebrated its 50th year, as recognition many organisations and individuals wrote to congratulate all those who have made Cornwall everything it is today. None were more moving than the letter received from NZ and Cornwall Legend, Martin Crowe, as pictured below. 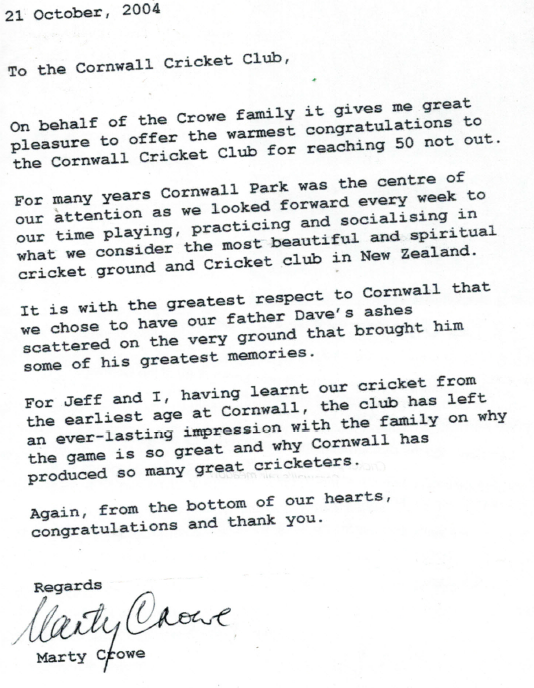 In 1995 Graham Burgess reflected that "a sight to gladden the hearts of all enthusiasts can be had every summer Saturday morning when the picturesque Cornwall Park ground is inundated with several hundred boys and girls honing their skills aided by parental supporters." We can proudly report that since then Cornwall's junior programme has continued to flourish, now boasting over 1000 juniors. This makes Cornwall the largest club in NZ and Australia, in terms of membership. ​​​​​​​

In 1962, Cornwall hosted its first test match, a three-day women's international between New Zealand and England. A victory to England in a close fought match shown live on national television showed our facilities in a very positive light. While it took another 26 years for Cornwall to develop our own women's section, Graham Burgess observed the beginning of a Women's Division in 1995, we have never looked back. Burgess' prediction that a women's division would "contribute with merit to the grand old game" was proved correct. Cornwall Cricket Club has become the home of women's cricket in Auckland and is by far the most successful in terms of membership and producing representative players for both Auckland and New Zealand.

Those in green are men, yellow are women.

Where To Find Us